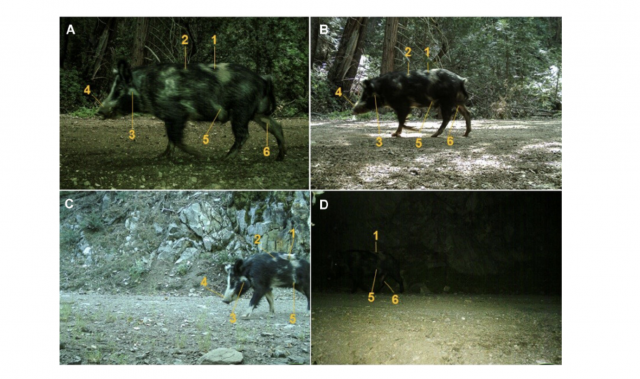 "[E]xample of criteria of image quality we show 4 photos (A–D) that were used to identify and resight wild pig M02 over a period of 9 monthsacross multiple camera stations within our survey grid on Tejon Ranch, California, USA, during 2015–2016." Credit: Ben Teton

"To estimate population abundance of wide‐ranging and elusive species, wildlife managers require practical data‐collection methods that are efficient, accurate, and cost‐effective. Natural abundance marking can provide a useful solution, but it has largely been utilized only for conservation monitoring of species with very high distinctiveness. We estimated abundance of invasive wild pigs (Sus scrofa), a widespread pest species with low to moderate distinctiveness, in the Tehachapi Mountains of California, USA. Wild pigs are increasingly recognized as a major threat to wildland communities throughout the United States, but we still lack cost‐effective ways to track their populations. We used natural markings to identify individuals for mark–resight population estimation, developing a method based on standardized thresholds of image quality and animal flank distinctiveness to account for the inherent variability of natural markings among individuals. We tested our method over a 15‐month period during 2015 and 2016, using an array of 48 camera traps across a 48‐km2 survey grid. With 18.5% of wild pigs meeting our conservative standard of identifiability, we estimated abundance using standard mark–resight methods that ranged from 506 (±69 [SE]) individuals in summer 2015 to 184 (±44) individuals in spring 2016. We were able to detect a likely decline in the wild pig population from 2015 to 2016, which was supported by a simultaneous decline in hunter harvest totals in the region during the same period. Our approach requires no trapping or tagging of any kind, so it may be utilized as an efficient alternative to techniques that rely on physically capturing animals to apply ear‐tags or neck‐bands for individual identification."

Link to Paper Below