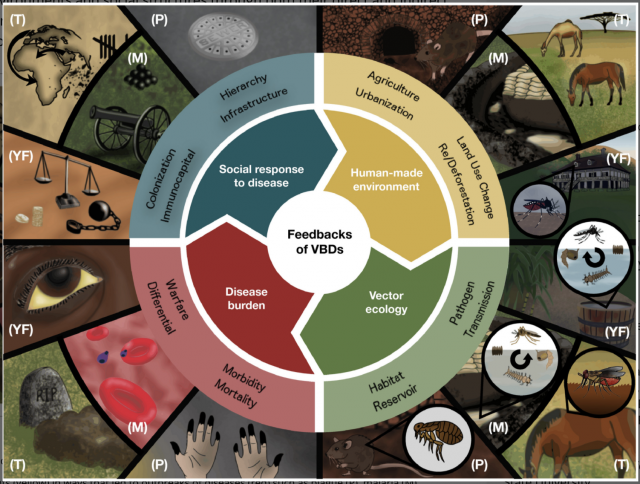 "Vector‐borne diseases (VBDs) are embedded within complex socio‐ecological systems. While research has traditionally focused on the direct effects of VBDs on human morbidity and mortality, it is increasingly clear that their impacts are much more pervasive. VBDs are dynamically linked to feedbacks between environmental conditions, vector ecology, disease burden, and societal responses that drive transmission. As a result, VBDs have had profound influence on human history. Mechanisms include: (1) killing or debilitating large numbers of people, with demographic and population‐level impacts; (2) differentially affecting populations based on prior history of disease exposure, immunity, and resistance; (3) being weaponised to promote or justify hierarchies of power, colonialism, racism, classism and sexism; (4) catalysing changes in ideas, institutions, infrastructure, technologies and social practices in efforts to control disease outbreaks; and (5) changing human relationships with the land and environment. We use historical and archaeological evidence interpreted through an ecological lens to illustrate how VBDs have shaped society and culture, focusing on case studies from four pertinent VBDs: plague, malaria, yellow fever and trypanosomiasis. By comparing across diseases, time periods and geographies, we highlight the enormous scope and variety of mechanisms by which VBDs have influenced human history."

Link to Full Article Below