To save this palm-filled paradise, biologists must kill the trees 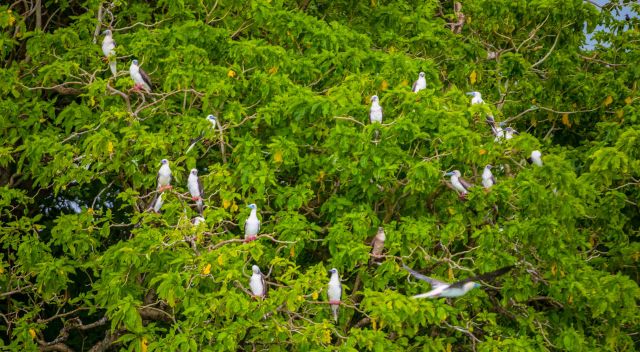 "PALMYRA ATOLL IN THE CENTRAL PACIFIC OCEAN—Duncan Coles lops the head off a juvenile coconut tree with a practiced swing of his machete. He and nine other volunteers chop away at the thicket, stepping over piles of fallen coconuts and fist-size hermit crabs. Soon they return to their decapitated kills, dousing each stump with blue-dyed herbicide. Two other volunteers use power drills to set upon the mature coconut trees towering overhead, boring holes and filling them with shots of herbicide.

The slashing and poisoning is part of an unprecedented endeavor to rid this remote atoll of all but a few coconut palms (Cocos nucifera). The gangly tree is an icon of idyllic tropical islands, but also an aggressive invasive species that crowds out native plants and animals. By removing 99% of Palmyra’s millions of palms, biologists hope to create more room on the atoll’s three dozen islets for indigenous forests and seabirds, including the world’s second largest colony of red-footed boobies. If all goes as intended, the restoration effort could help make this coral-ringed atoll, which has an elevation of just 2 meters, more resilient to sea-level rise and other ravages of climate change."