Ana's work on cascading effects of rodent eradication on island ecosystems and above ground biomass featured in the Economist and other venues. 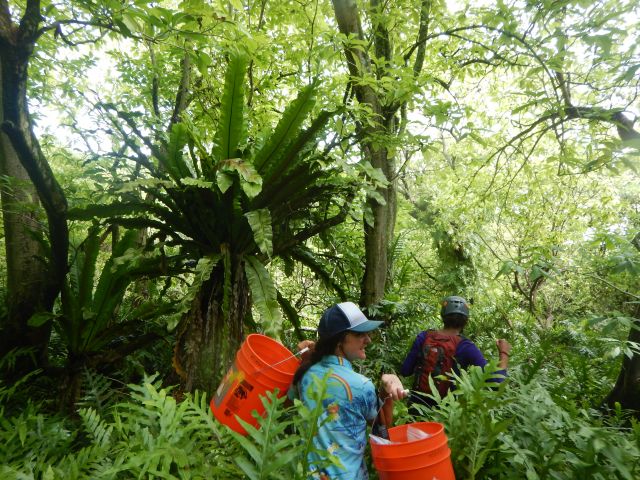 Ana in the understory at Palmyra

Expert of The Current's article by Sonia Fernandez

"The black rats weren’t supposed to be there, on Palmyra Atoll. Likely arriving at the remote Pacific islet network as stowaways with the U.S. Navy during World War II, the rodents, with no natural predators, simply took over. Omnivorous eating machines, they dined on seabird eggs, native crabs and whatever seed and seedling they could find.

When the atoll’s managers — the U.S. Fish and Wildlife Service, The Nature Conservancy and Island Conservation — were planning to conduct a rat eradication project, UC Santa Barbara community ecologist Hillary Young and her research group saw it as an unusual opportunity. They had already been visiting Palmyra regularly to track another non-native species — the coconut palm — to see whether it was spreading invasively in the area, potentially impacting the nesting seabird population and changing the island’s soil composition. They had plots where they were monitoring trees in various stages of growth and survival; how would the vegetation respond to the eradication of the island’s main seed and seedling eater?

“Prior to the eradication, most of the understory of Palmyra was either bare ground — sandy soil or coral rubble — or covered in a carpet of ferns,” said Ana Miller-ter Kuile, a graduate student researcher in the Young Group and lead author of a study that appears in the journal Biotropica. The rats were quick to eat seeds and young plants coming out of the ground, and they frequented the canopy as well, often nesting in the coconut palms and eating coconuts.

Eradication of the rats — which was conducted in 2011 — did in fact result in a resurgence of vegetation on Palmyra. And not only that. The Asian tiger mosquito was wiped out, while two species of land crab emerged, adding to the atoll’s biodiversity.

But rarely is ecology easily untangled. In the years that followed eradication, Palmyra’s understory did indeed fill with juvenile trees as seeds that hit the ground were allowed to take root. Only they were often not the Pisonia or other native trees that would have been the more ideal forests for the native seabirds and animals of Palmyra."

Read more of The Current's article by Sonia Fernandez as well as the Economist and Atlas Obscura articles by Ana, linked below.